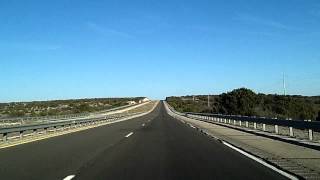 This drive begins in the middle of nowhere, at the intersection of US 191 and Interstate 10, then follows 10 eastbound until it got dark, somewhere around Kerrville, Texas.

This is just the first in a series of videos along Interstate 10, from west Texas through most of Florida. Enjoy the whole ride!

You’ll find the track title at the end of the video.

Yes, I do have written permission from Von to use his music.

During my stopover in Houston, we stayed at Corporate Housing Houston. We find that they typically have the best corporate housing in Houston.